You are using a web browser that may not support the design features on this site.

For the best experience, please switch to another browser. We recommend Chrome or Firefox.

Why You Should NOT Use Super Glue on Your Teeth 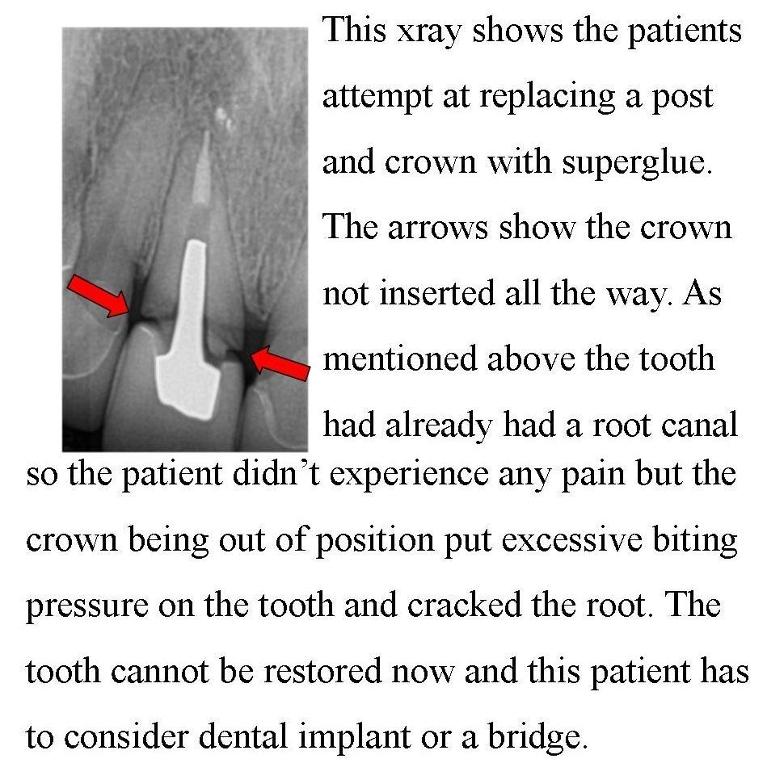 There are several reasons why attempting to be your own dentist or using chemicals that are not designed for use in the mouth are a bad idea.  Recently we had a patient come into the office who had a crown and post come off of his front tooth 3 weeks earlier. Since the tooth had a root canal the patient had no pain and figured he would save a visit to the dentist by using superglue to put it back in. When he put the crown back in it was slightly out of position and when he closed his teeth together he only contacted on the one tooth he had tried to fix. He came into the office with hopes that we could simply remove the crown and re-cement it properly. We took an x-ray, which showed a fractured root which happened as result of the crown being out of position. His only option at this point was to extract the tooth and restore the area with a dental implant or a bridge. In this situation, the patient made his problem more complicated, time-consuming, and expensive.

The Risk of Self-Treating

Another reason to avoid superglue is that it is not friendly to the tissues in the mouth. The gums are made of delicate tissue and the teeth have pores called tubules that are connected to the nerve of a tooth. When you introduce a toxic chemical such as superglue the gum tissue will become inflamed and the nerve inside of the tooth will likely die, requiring root canal therapy. Patients unknowingly use superglue in an emergency situation and cause further damage to the tooth. A better option if a crown comes off and you can’t get right into a dentist is to get temporary dental cement at a drugstore. This cement is designed for use in the mouth and won’t contribute to worsening the problem. Since temporary cement does not seal the tooth it is important to get into the dentist at your earliest convenience and have the tooth evaluated and the proper treatment rendered.

Return to Blog Homepage
Like us on FacebookFollow us on TwitterVisit us on YelpWatch our Youtube VideosCheck Out Our Reviews On GooglePin us on PinterestInstagramFourSquare
If you have difficulty using our website, please email us or call us at (407) 381-3000
View the ADA Accessibility Statement
Turn on ADA Views

For the most up to date information on appointments and procedures, please click here to visit our COVID Updates Page.